Mdina, once known as Città Notabile, was Malta’s capital until 1571 when the Knights of St John’s decided to build the new capital city of Valletta in order to better defend the island’s harbours.
Designed to withstand attacks by enemy forces, medieval Mdina is built on one of the island’s highest hills and is entirely surrounded by fortified walls. It’s believed that people have been living here since the Phoenicians first arrived on the island in around 700BC.
The Silent City, a nickname that you will understand if you visit the city at night, is a world apart from modern Malta, it is an extraordinary mix of medieval and baroque architecture. The atmosphere is magical, walking through the shady alleys you will feel stepped back in time.
From Bastion Square you can enjoy one of the best panoramic view on the North East of the island.
In Mdina there is one of the most popular cafes of the island, Fontanella Tea Room and Restaurant, I strongly recommend you go and try a delicious piece of cake.
Compagnia di San Michele, a Maltese historical interpretation group and voluntary organisation, holds a series of free interactive tours. You can check their Facebook Page for announcements on day and time, click here.

HOW TO REACH MDINA

There are not a lot of accommodation options in Mdina and Rabat, apart from a 5 star hotel and some guest houses, you might find some apartments for short let even in the adjacent village of Rabat.
You can give it a try on booking.com. 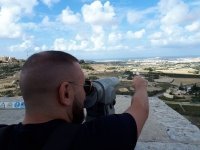 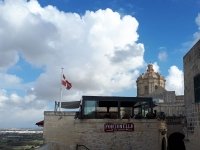 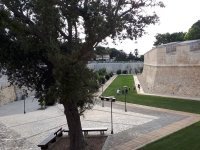 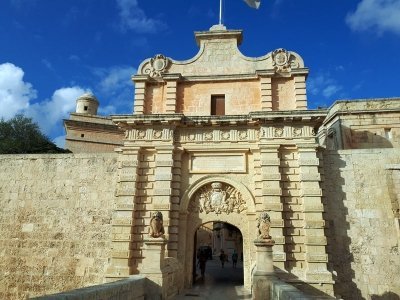 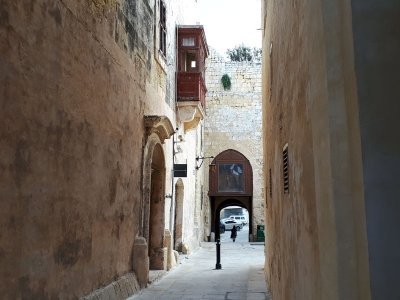 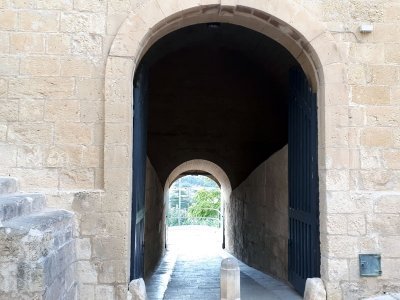 There are only three entrances to the city: the main Mdina Gate, the secondary Greeks’ Gate and a smaller side-entrance whose official name is Għarreqin Gate but it’s also known to the locals as “the hole in the wall”.

The main Mdina Gate is one of the favourite spots for pictures and selfies. Designed by the French military engineer Charles Francois de Mondion and constructed in 1724, the Mdina Gate was commissioned by Grandmaster Antonio Manoel de Vilhena to replace the drawbridge gate that was there previously.
It was here at the Mdina Gate that successive Grand Masters of the Knights of the Order of St. John were met by the Maltese nobility of Mdina and given the keys to the city once they had sworn to uphold the rights and privileges of the noble families within the city walls.

The Mdina’s smaller secondary entrance is the Greek Gate that once led to the small Greek community that used to inhabit the south-west of the city surrounding St. Nicholas Square. According to a legend this narrow gate was used by slaves that were not permitted to use the main entrance to the city. This is one of the oldest and most charming parts of medieval Mdina. 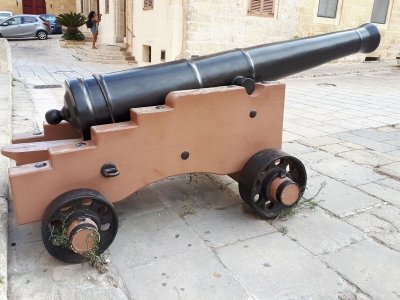 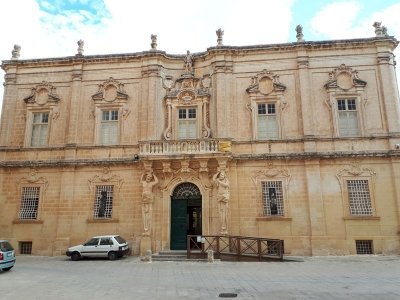 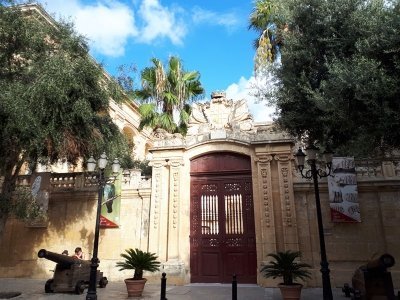 The large open square at the centre of Mdina hosts two brass cannons right in front of the cathedral. Those were returned to the city from the Artillery Museum of Woolwich in England in 1888.
Taking pride of the square is the Cathedral of St Paul which was built between 1697 and 1702. It replaced a medieval cathedral also dedicated to St Paul and severely damaged by the earthquake of 1693.
According to a legend St Paul converted the Roman Governor Publius to Christianity here.
The Cathedral towers high above the surrounding buildings and the church dome dominates the Mdina skyline.
The Cathedral’s interior features diverse works by the Calabrian artist and knight Mattia Preti.
Adjacent to the cathedral is the Cathedral Museum. The collection includes early painted panels from the Spanish Romanesque period, 19th and 20th Century paintings as well as a series of woodcuts by the renowned German artist Albrecht Dürer.
CATHEDRAL & MUSEUM OPENING HOURS
Monday to Saturday from 9.30 to 17.00
Sunday from 15.00 to 17.00

ENTRANCE FEE
€ 5 for adults and it includes access to the Cathedral, the Museum and a very small exhibition at Palazzo De Piro, which is a few meters away from the Cathedral.

The National Museum of Natural History opened its doors in 1973 in what is known as Palazzo Vilhena or ‘The Magisterial Palace’. This was constructed by the Portuguese Grand Master Manoel de Vilhena in 1730 and designed in the Parisian Baroque style.
Under the British, the palace was transformed into a hospital that eventually close down in 1956.
The Museum displays cover various topics: Maltese Geology and Palaeontology, exotic mammals, marine fauna, insects, shells and birds and other topics like human evolution.
OPENING HOURS
Monday to Sunday from 9.00 to 17.00, with last admission being at 16.30
ENTRANCE FEE
€ 5 for adult visitors
The Museum is closed 24th, 25th, 31st December, 1st January and Good Friday.

OTHER POINTS OF INTEREST 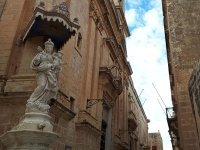 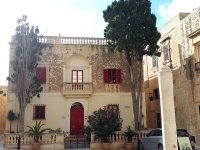 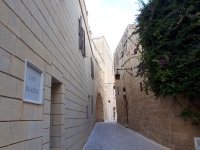 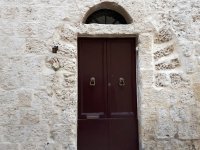 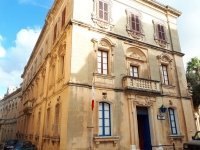 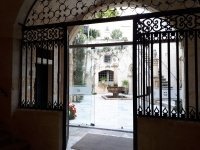 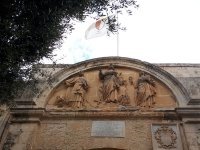 and St Paul the Shipwreck 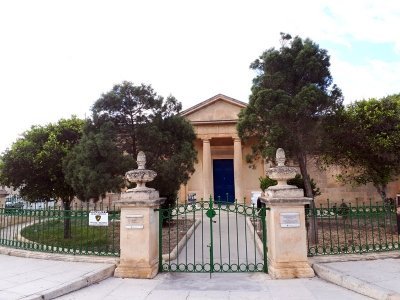 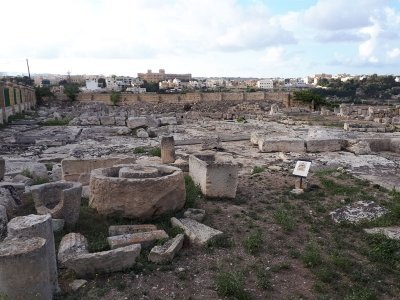 Rabat is an old traditional village just outside Mdina. The name is derived from the Arabic word for ‘suburb’ as the village was separated from Mdina during the Arab occupation.
Rabat is home to the famous Catacombs of St. Paul and St. Agatha which were used in Roman times by Christians, Jews and pagans to bury the dead. The Catacombs were also where early Christians secretly met and performed Mass until Emperor Constantine made Christianity the official religion of the Roman Empire.
Close to St. Paul’s Catacombs is St. Paul’s Grotto where it is believed that St. Paul traditionally stayed for three months and preached the gospel to the Maltese after he was shipwrecked on the island in AD 60 on the way to Rome for his trial before Caesar. Indeed, he had been arrested in the Holy Land for sedition and treason.
Following his departure to face his trial and subsequent execution in Rome, the Grotto was turned into a meeting place for the early Christians and has been treated with veneration ever since.
According to legend, stone powder scraped off the cave walls had healing properties and could heal snake bites and fever and every stone broken from the walls would grow again so the Grotto would always remain the same size.

Heritage Malta, the national agency for museums, conservation practice and cultural heritage, gives you the opportunity to buy the Mdina & Rabat Cultural Experience ticket which includes entrance to the Domus Romana, the National Museum of Natural History and St. Paul’s Catacombs. The ticket also includes the Sight Seeing Train Tour (Mdina – Rabat – Mtarfa).
The ticket price is €15.00 for adults, € 10 for seniors and students and € 7 for children. You can buy the ticket online here.